Giraffe stl low poly style. This Giraffe stl can be printed for decoration or educational. The giraffe (Giraffa) is an African artiodactyl mammal, the tallest living terrestrial animal and the largest ruminant. 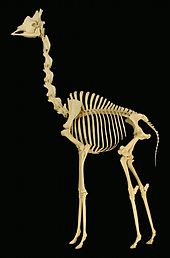 Giraffe skeleton on display at the Museum of Osteology, Oklahoma City, Oklahoma

The giraffe’s prehensile tongue is about 45 cm (18 in) long.[45][46] It is purplish-black in colour, perhaps to protect against sunburn, and is useful for grasping foliage, as well as for grooming and cleaning the animal’s nose.[50]:27 The upper lip of the giraffe is also prehensile and useful when foraging, and is covered in hair to protect against thorns. The tongue and inside of the mouth are covered in papillae.[7]

The coat has dark blotches or patches (which can be orange, chestnut, brown, or nearly black in colour[51]) separated by light hair (usually white or cream in colour.[51]) Male giraffes become darker as they age.[42] The coat pattern has been claimed to serve as camouflage in the light and shade patterns of savannah woodlands.[43] Giraffe calves inherit some spot pattern traits from their mothers, and variation in some spot traits are correlated with neonatal survival.[52] The skin underneath the dark areas may serve as windows for thermoregulation, being sites for complex blood vessel systems and large sweat glands.[53] Each individual giraffe has a unique coat pattern.[42]

The skin of a giraffe is mostly gray,[48] or tan.[54] Its thickness allows the animal to run through thorn bushes without being punctured.[50]:34 The fur may serve as a chemical defence, as its parasite repellents give the animal a characteristic scent. At least 11 main aromatic chemicals are in the fur, although indole and 3-methylindole are responsible for most of the smell. Because the males have a stronger odour than the females, the odour may also have sexual function.[55] Along the animal’s neck is a mane made of short, erect hairs.[7] The one-metre (3.3-ft) tail ends in a long, dark tuft of hair and is used as a defense against insects.[50]:36